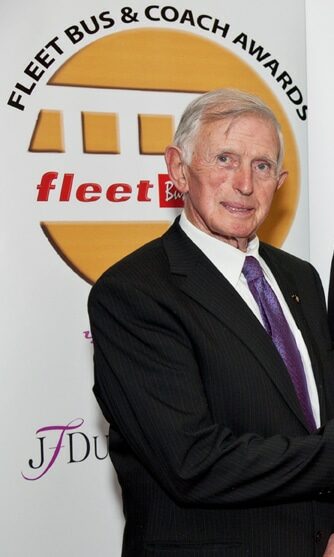 Like many Coach Operators, Pierce Kavanagh started from a truck background. From the passenger seat of his father’s truck, the young Pierce, starting off as a helper, learned his trade and developed a hunger for the road and for travel. It was a different time in the late 1940’s, with very little of the creature comforts standard in trucks and buses now. By the early 1950’s his dad, Jack, had encouraged Pierce and his brothers, John and Dickie, over to the driver’s seat. A seat he fitted into very easily and a place he enjoyed.

In early 1963 Pierce expanded his horizons, bought a crashed bus, repaired it and put it back into service. Here was the start of a love affair with passenger transport that engulfed his life. Before long, all the trucks had been sold and it would be passenger transport all the way from here on.

Pierce loved people, a characteristic that meant that service and customer satisfaction came naturally to him. In those days foreign travel by coach from Ireland was in its infancy, while flying was limited only to the well-off. Pierce was one of the pioneers of international bus travel. In 1969 he and his drivers took a group of Scouts from Dublin to Vienna with two Duple Viceroys; this was to be the start of a new era in continental travel by bus from Ireland. Many memorable trips followed: Russia, Romania, Poland and Hungary were as regular a destination as Knock or Dublin.

Back at home, Pierce always enjoyed the energy he got from being around the family filling station, meeting and chatting to people. He opened at 4.30am every morning and had a steady stream of trucks passing through, drivers whose friendship he valued more so than their custom. Pierce was a humble man, always looking for simple solutions to complicated problems. If anyone enquired as to how he was, he would generally tell them he “hadn’t gotten around to asking himself that today yet”.  One operator told me recently that he went to Urlingford to buy a bus. Unfortunately there were two buses he took a fancy to and the man could not decide. Pierce offered a simple solution, “Call back in a day or two, I will have one sold, then you can buy the other one” That focused his attention.

From the early 2000’s, Pierce had taken a step back from the day to day running of Pierce Kavanagh Coaches, but as Pierce Jnr said, “he was always there” Pierce liked nothing better than to indulge in stories of overheating trucks, broken springs and near impossible deadlines …. those days are long gone now at Pierce Kavanagh Coaches. Run now by his family, Pierce Jnr and John, Pierce Kavanagh Coaches is still a pioneering and adventurous company, never afraid to push the boundaries of business and service. Today they remain one of the most progressive operators around, an ethos built on simple but strong foundations laid by their late father, Pierce Kavanagh (RIP).

Volvo Bus will launch a complete new line up of chassis this week at its headquarters in Gothenburg, Sweden. With a promise of improved…

Although not yet available in right hand drive (RHD) markets yet, the Karsan  e- ATAK electric commuter bus made a big impression during its…

Message from the CEO of Fáilte Ireland

The ninth staging of Busworld Turkey, organised by Busworld and its Turkish partner, HKF Trade Fairs, was held for three days, from 26 to…

The report by renowned economist Jim Power, highlights the exclusion of commercial bus operators (CBOs) from the scheme – noting that the exclusionary policy…

Details of the Galway Hydrogen Hub (GH2), Ireland’s first Hydrogen Valley have been announced at a launch event in NUI Galway.  GH2 is a…

As the Clean Air Day occurs tomorrow 16-06-22, Alistair Aitken, Head of Sales at UK public transport app and website provider, Passenger has shared his views on how changing…

Vehicle transmission and safety equipment manufacturers ZF has been recognized for being the “Best Brand – Commercial Vehicle Transmissions”. That is the verdict of almost…